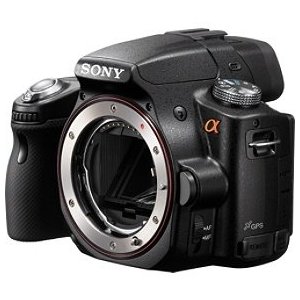 In 2010, Sony rocked the prosumer-level DSLR market with its release of the α55.  While it got all the awards and attention, Sony also released its little brother, the almost identical α33.

While you can pick up either of these cameras new today for a lot less than their original price, the α33 is still around $150 cheaper. So if you’re trying to decide which of these camera’s to purchase, the question isn’t so much if the α55 is better, but if it’s $150 better.

In this article, we’ll try to help you answer that question for yourself, and decide which––if either of these cameras––is best for your needs.

Both cameras share a lot of features. Aside from looking the same, they both feature first-in-class translucent mirrors that do what seems impossible by reflecting light––and letting it through at the same time. This allows for several things, including digital live-view in the viewfinder and continuous autofocus during video recording––a first for any DSLR.

Both shoot photos in RAW or JPEG and videos in beautiful HD 1080/60i recording using the super data efficient AVCHD or versatile MP4 formats. Both allow for full manuel or automatic control of exposure and focus during still photography, and have fully articulated monitors.

The α55 pulls ahead most obviously in the area of resolution, with 16.2 megapixels to the α33’s 14.2. Honestly, unless you plan on blowing up your photos to wall-sized posters, this won’t be a noticeable difference, but more resolution never hurts either.

More significant in our opinion is shooting speed. While the α33’s 7fps at full resolution is nothing to be ashamed of, the α55’s blazing 10fps leaves it well behind when capturing fast activity.

One feature on the α55 that the α33 lacks completely is built in GPS. This allows for geotagging of photos and videos.

I personally did a lot of traveling for different projects in 2011, and carried an α55 with me every step of the way. Since then I’ve enjoyed the ability to organize my photos based on location, which was fun, even if it probably doesn’t have many practical applications for most photographers.

So is the extra money for the α55 worth it? That depends on what you want to do.

If you are buying the camera to use for photo-shoots where higher resolution images may be required, or sporting events where professional-class shooting speeds are a plus, then our answer is definitely a yes for the α55.

However, we also know many individuals who have purchased these cameras primarily for their video capabilities. The fact of the matter is, the α55 offers absolutely no advantage over the α33 in this area. The α33 shoots in the same AVCHD format with the same Phase Detection autofocus as the α55. It also shares a dedicated ‘record’ button and audio input for virtually any microphone type with its more expensive counterpart.

So if you’re planning on purchasing this camera mainly for video shoots, save yourself some money and go with the α33.

If you have any questions that this article didn’t answer, feel free to leave them in the comments and we’ll do our best to answer them. For a quick comparison list of features, look below:

What you get with both cameras:


What you get only with the α55

Whichever camera you decide on, we hope this article has been helpful to you, and we would be honored if you would support us by purchasing through one of the links below! 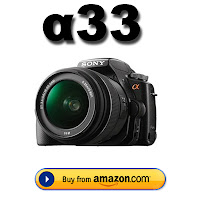 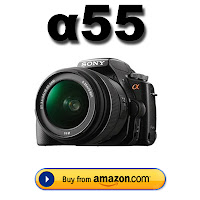 Posted by ProsumerReviews at 11:07 AM No comments:

If you’ve ever looked at professional photo or video editing software, you know it can easily range from hundreds to thousands of dollars. That’s fine if you’re a creative professional who gets paid $200 an hour to use that software, but what if you’re a mere mortal like most of us who just happens to be passionate about quality?

In this post, we’re going to look at three photo/video editing programs that approach professional level functionality and are completely FREE. We use these three on an almost daily basis at ProsumerReviews, and if you give them a try, you’ll wonder how you ever got by without them!

The first program we're going to look at is MPEG Streamclip written by Italian based SQUARED5.

MPEG Streamclip is a video player and editor, but where it really shines is as a converter and compressor. You can use it to turn just about any video format or codec into another format. Turn gigantic Quicktime or Apple Intermediate files into high quality MPEG4s that will upload to YouTube in a fraction of the time. Manually control data rate, audio format and interlacing, or choose from a variety of powerful presets for iTunes or iPod. If that’s not enough, you can also cut and splice movies, or download them from YouTube just by entering the url.

If you plan on working with video, MPEG Streamclip is a must for your software library.

The next program we’re going to look at is something that a short time ago, you couldn’t have dreamed of unless you had a production budget in the tens-of-thousands of dollars.

Blender, developed by Blender Foundation in Amsterdam, is a professional level 3D modeling and animation program. Whether you want to model landscapes, architecture, or figures for still images––or key frame them for fully animated films, the sky is the limit with blender. You can use it to create stand-alone projects, or export animations with an alpha channel to overlay onto live-action footage in Final Cut or Adobe Premier.

While blender isn’t something most people can become proficient with overnight, the only risk you have to invest in trying it will be the time it takes to download for free from blender.org. And with versions available for Windows, Mac and Linux, you can run blender no matter what OS you use.

Last, we’re to going look at one of the most powerful and widely used freeware photo editing programs ever: GIMP.

Produced by the GIMP Development Team, this app can be used to do just about anything you would do with Adobe Photoshop. Retouching, overlaying multiple layers, levels adjustment, online batch processing and much more. Only where Photoshop would set you back between $100 and $1000 depending on what bundle you purchase, Gimp is free. It also runs on almost every platform imaginable. Whether you need to create alpha-channel cutouts, color correct from a photo-shoot, or convert photos from one obscure format to another, GIMP is there for you.

We hope that you find Gimp, Blender, and MPEG Streamclip as useful as we do, and we hope this post has been helpful in your creative endeavors!

If you have a SONY Alpha series camera (a33, a55, a65, NEX-7, etc) you know that while the video quality is fantastic, the internal microphone leaves MUCH to be desired.

The obvious solution is to add an external microphone, and SONY has stepped up to the plate with the ECMALST1 stereo microphone. But is this mic worth the investment? Let's take a look.

The ALST1 is small but there's a lot to it. Let's start with the accessory shoe mount. This mount is proprietary to SONY, so you're not going to find another external microphone that clips onto your Alpha line camera without any kind of adapter. That's one of the biggest reasons to go with this mic over another brand.

SONY has also incorporated a noise insulation system into the base of the mic, to reduce the noise from the camera's stabilization system and autofocus. If you watch our video test of the mic, you'll see that we found this to be very effective at dampening the noise from the stabilization, but only partly successful with the autofocus. (Fortunately you can turn either of those features off any time you want).

On to the microphone itself. 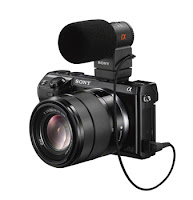 The mic is powered by a tiny 1.5v watch battery, which gives you up to 40 hours of recording time and can be replaced by twisting off the back of the mic.

The ALST1 has two stereo-pickup patterns, one 90° and one 120°. This is a great feature, because it allows you to record wide, ambient noise with the 120° or a narrower, almost shotgun mic range with the 90° (useful for tuning out the background noise when trying to record someone talking).

NOTE: on either setting, there is almost no pick-up behind the camera, which is a good thing, just don't plan on using it to talk while your filming and have yourself heard.

The ALST1 also includes a carrying pouch and windscreen, which is useful when recording outdoors.

All things considered, the ECMALST1, while not perfect, is a HUGE improvement over the built-in audio on the SONY Alpha line cameras. The price, previously around $150 was a bit prohibitive for what it is. Fortunately, they have now been marked down significantly on Amazon. If you decide to add the ECMALST1 to your audio-video arsenal, we would be honored if you support us by adding it to your cart through the link below.

Have you ever wanted to record great sounding dialogue audio without the distraction of holding a bulky microphone? Are you tired of getting tangled up in ugly XLR cables? Then it sounds like what you need is a wireless lavalier (lapel) microphone.

But wait: Wireless means expensive, right? Not anymore. While most wireless lavalier systems run well over $300, there is one that can fulfill all of your wireless needs for less than half that.

is a two-channel VHF (very high frequency) wireless microphone system that comes ready to plug into your DSLR or camcorder.

Two frequencies means that if you get interference on one, you can simply switch to the other.

Other features, like running off easy to find 9v batteries and an included camera mount and lapel clip make the AZDEN as easy to use as it is effective.

And it's very effective.

The system's microphone pickup has an omnidirectional polar pattern that crisply captures the audio from your target while excluding ambient noise. (click here to see three field tests that we did on the AZDEN).

The AZDEN also has a headphone output jack for real-time monitoring of your recording––which is essential with any kind of audio recording device. (Nothing is worse than getting back home, importing the video and finding out there is no audio track!)

We've used the AZDEN heavily for over a year and always find that it is reliable, user-friendly, and often exceeds our expectations for quality.

The best deal on the AZDEN WLX-PRO is currently on Amazon, and if you decide to add it to your audio-video arsenal, we would be honored if you support us by using the button below: